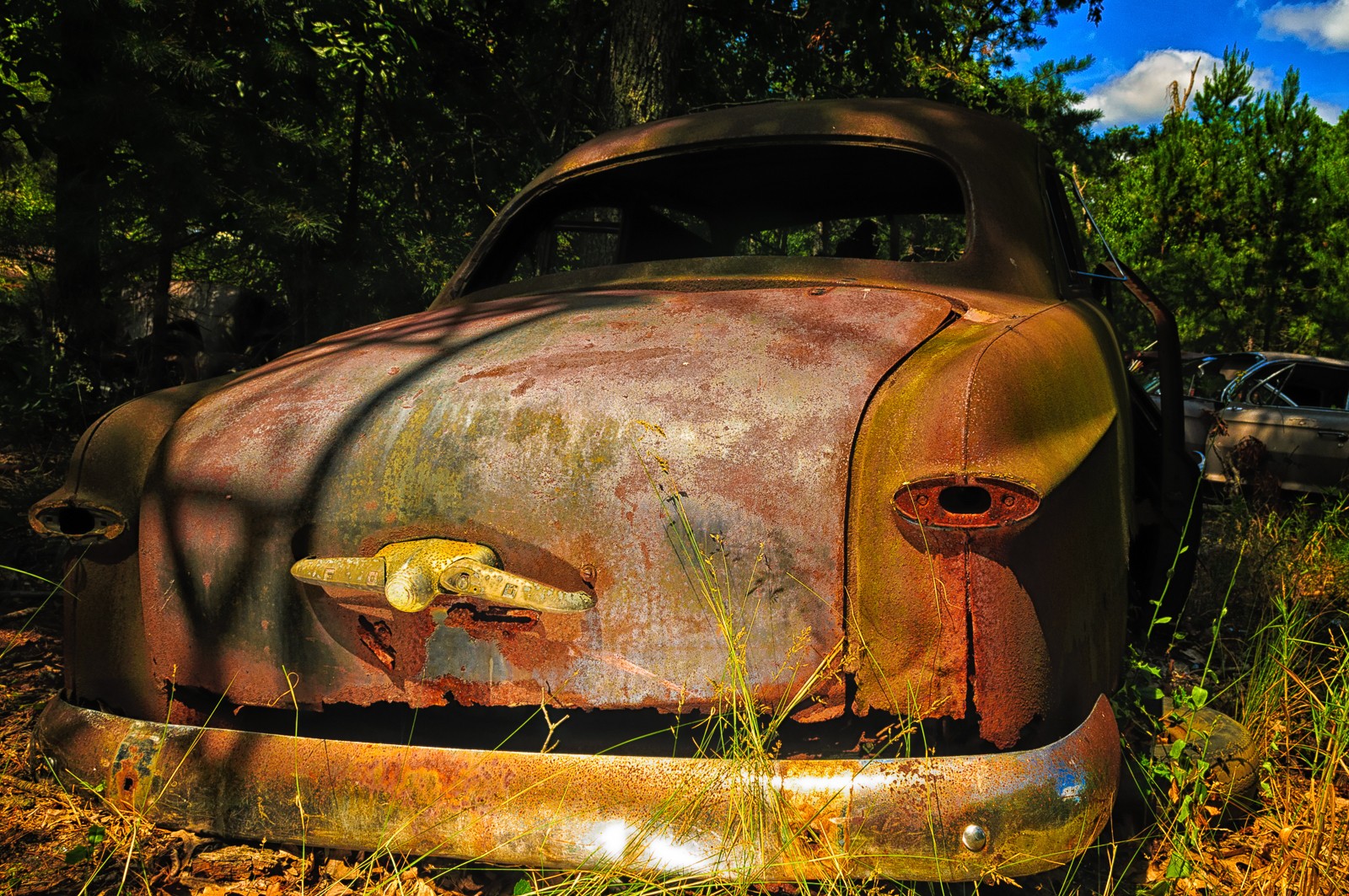 I felt safe there at the yard with the hawks giving me the and protecting me. I started to wander around, feeling my brain go into overloaded with confused images, of lots of things, how to brake them apart?
I don’t know, and then I saw a car that I remember having as a kid and them the idea of a theme came to mind. The idea was to find cars that I had a emotional connection with my early life, the teenage years.

There were a few and I won’t share all there stories, but this 1950 Ford coupe was real special for me.Â In the back seat of a this car I had my first kiss which I will always remember. It happened at a pep rally which I rarely went to, but this time the head cheerleader spied me and I was the target of her affection, so she dragged me into the backseat of this 1950 Ford coupe and kissed me. No, it wasn’t a 17 minute kiss or a deep french kiss, just a simple kiss on the lips. She then told me to lay down on the seat and she laid down on the back seat next to me.
I didn’t understand why at the time, but just did what she was told to do and played along. I guess people thought we were getting in on.
You know they were watching us like the submarine races as we use to call it.

Part of her mystic was that she was known as a lose women and played fast and dangerous with all the guys.
I was to play a role in keeping her image alive for her, I will never know why she chose me, maybe I was an easy target?

But we weren’t meant to see each other again and life moved on. After high school I got a life and things happened to meÂ like marriage, and 4 kids and a career etc and I traveled with my job and then moved away.

So now fast forward and realizing I never had any contact with any of my classmates
and attended any reunions so after 46 years I shocked beyond belief when I was contacted on Facebook by my fist kiss. I never told her she was my first kiss, to embarrassed to tell, you know guys are supposed to be experience at all that stuff.
We exchanged a few emails and then she returned to the ozone.
She is still lives in Cape May where I grew up and living the American dream and I’ll alway remember my first kiss.

Haha Lou, there was a study which found out Guys remember their first car better than their first kiss, i think its not your case;)
but a very powerful memo which i enjoyed a lot reading it, thanks

Bonnie; Thanks for visiting and I appreciate your comments, right on as usually :-D

What would the world be without all our wonderful memories?!