Mushrooms in The Woods

I spent the last few weeks hiking in the pine barrens. The time in the woods is my forest bath, it quiet and I connect with the trees and all of nature. I always carry my camera, just in case mother nature talks to me.

Something called synchronicity started happening to me with the plant world messengers coming forward and catching my attention. These messengers just happen to be mushrooms. Each day I found a new group mushrooms, by chance it seemed like they would just show up. I had no intention to be looking for mushrooms. The mushrooms reached out to me, and I took pictures of them and spent time with them not knowing their identity.

It didn’t just happen once; it happened many times. I took many photographs each time. It has happened for many weeks now and each encounter there were many different mushrooms.

The only connection to little me was I have been ingesting a few different mushrooms to help my memory and enhance my immune system. The feedback convinces me I’m on the right track. Stay tuned for more images.

Photo tip, Go for the low angle, get down on the ground. Just because, to get the horizon and straight the shot, don’t  shoot it too tight. By doing so that will let you straighten it in Lightroom.

These mushrooms from yesterday hike. I have been studying the health benefits of mushroom lately and this trip to Franklin Parker Preserve helped with my research. I also found this video useful, and I now drink coffee with mushrooms. They are great for the immune system with winter coming, I need all I can get to boost my IL6. Mushrooms in The Woods I found these beauties during a morning walk in the woods, near Medford, NJ. I enjoy taking photographs of them.
Edible mushrooms are the fleshy and edible fruit bodies of several species of macro fungi. They can appear either below ground or above ground, where they may be picked by hand. I have never been comfortable eating my own from the wild.
Mushroom are very healthy, and I try and include some in the diet. Great for the Immune system. 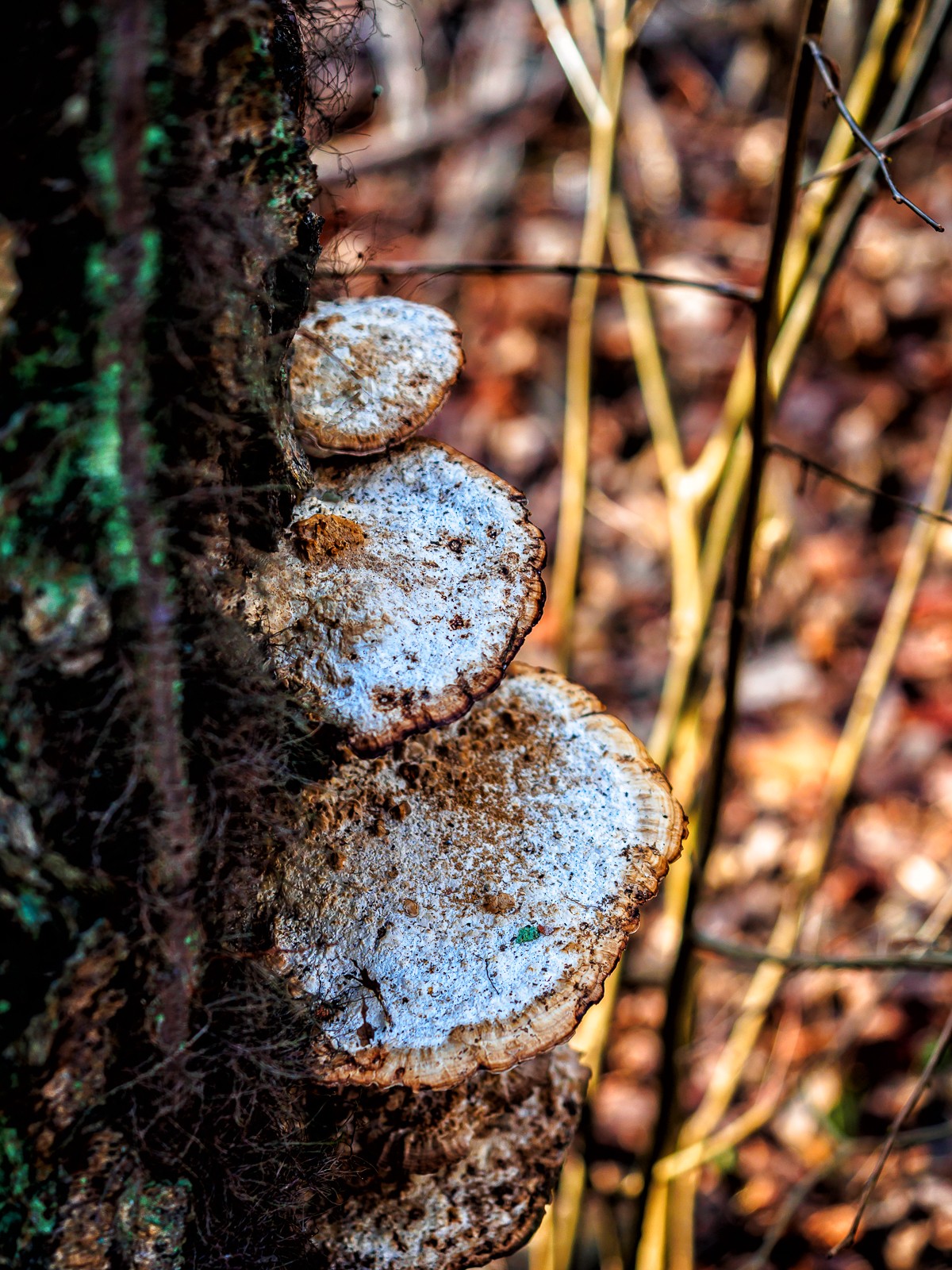 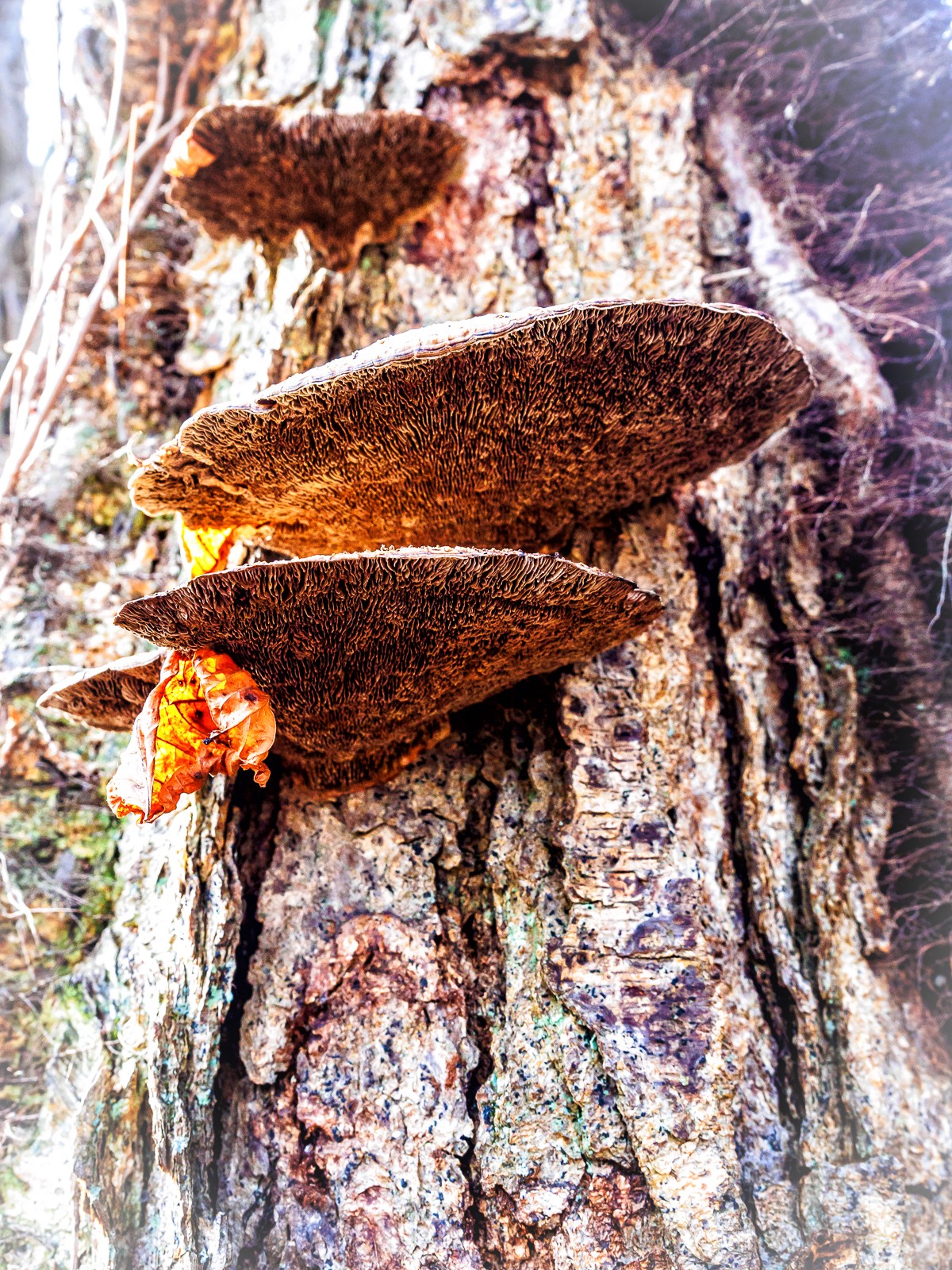 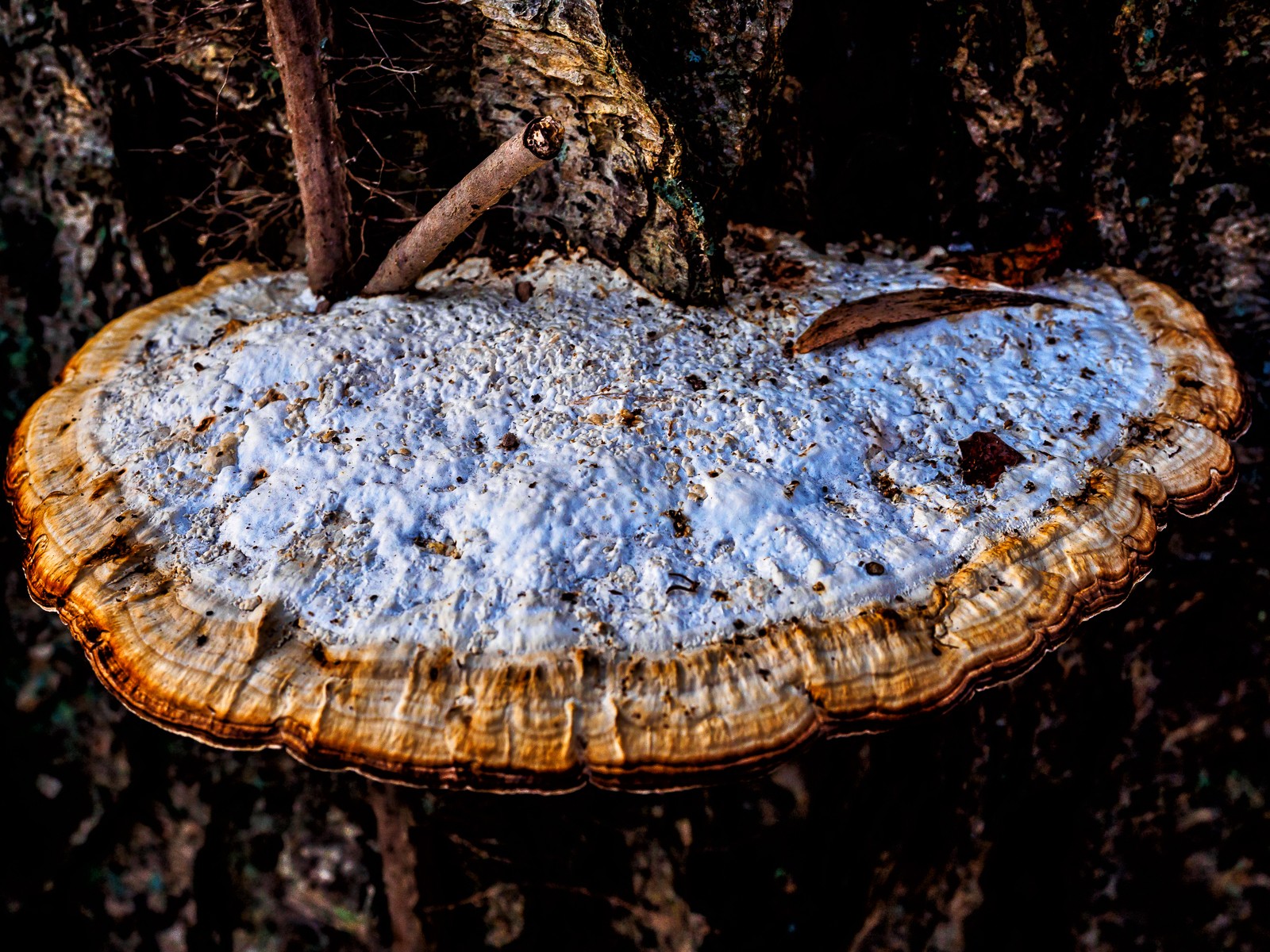 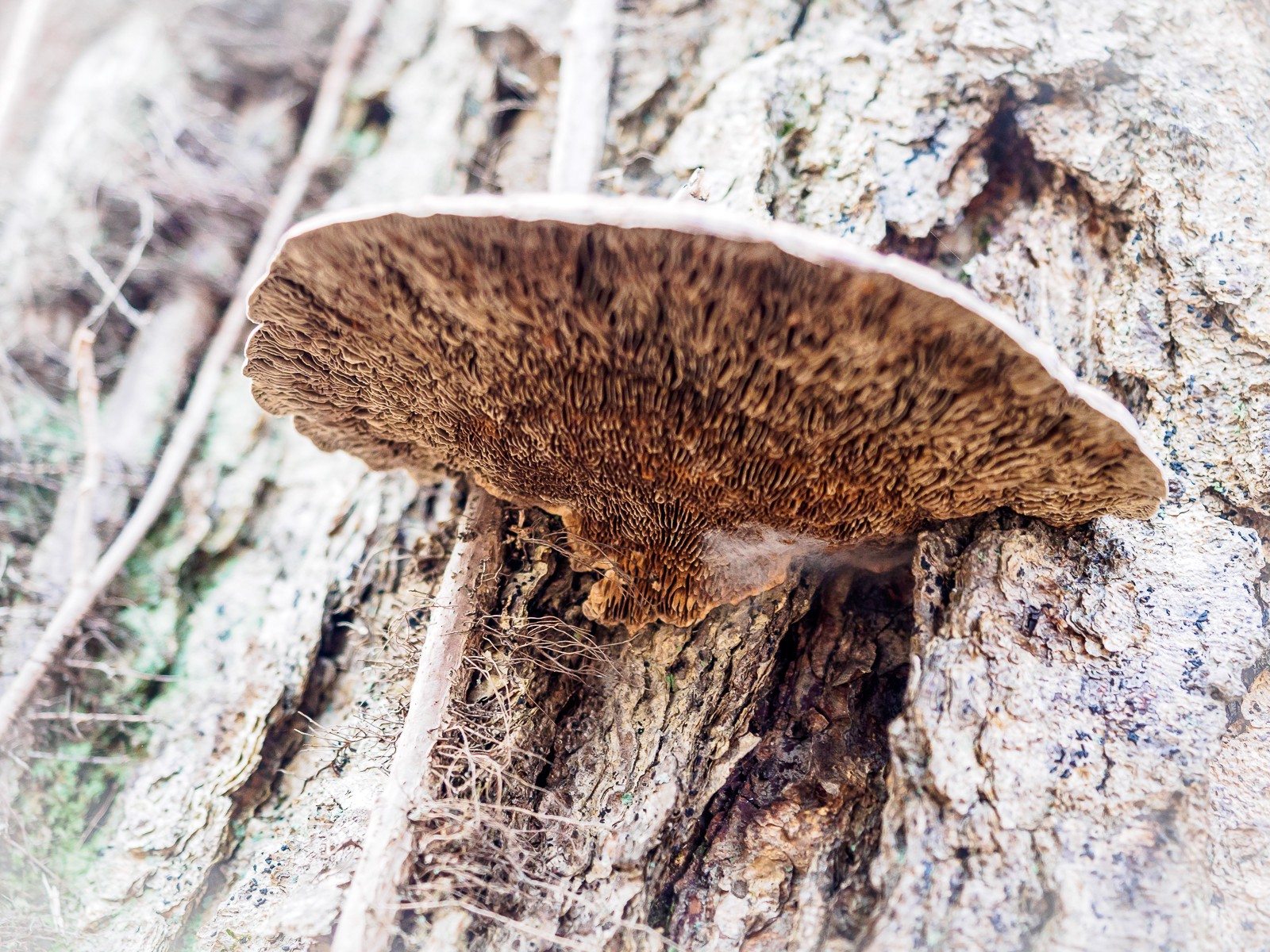 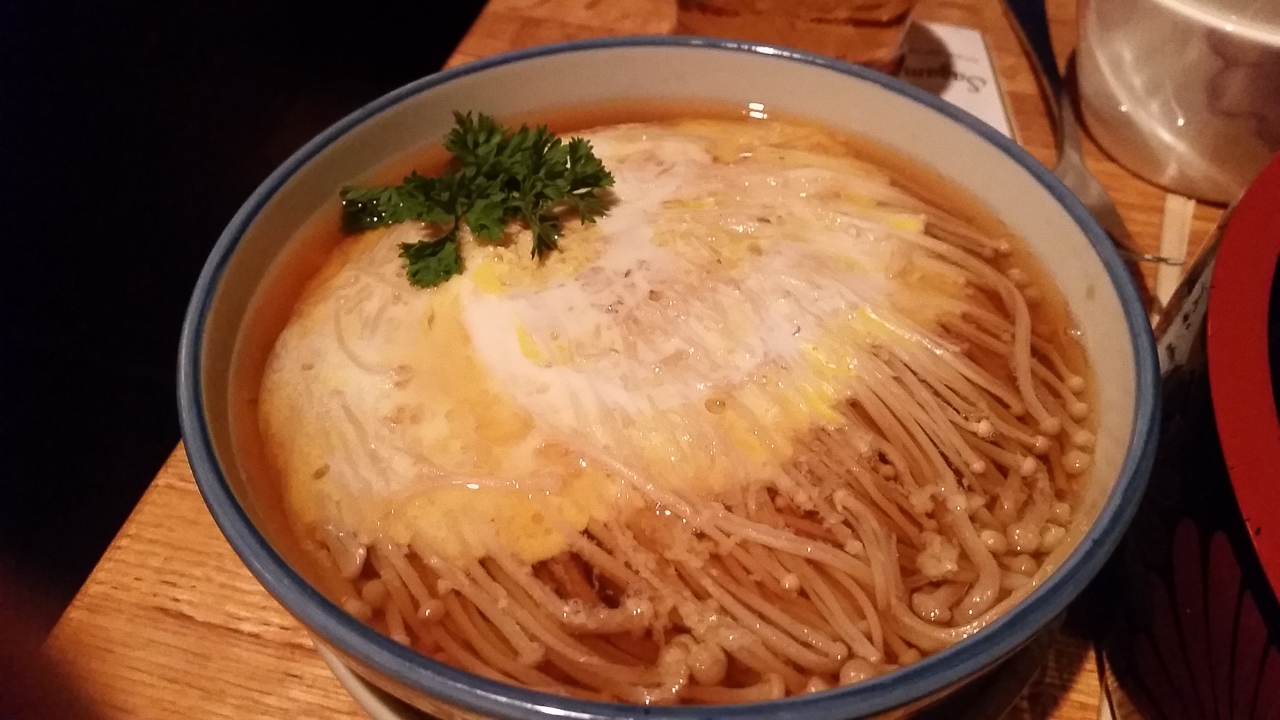 Here’s why Organic Mushrooms are good for your immune health

Mushrooms are touted as superfoods for a variety of reasons. Since ancient times, these edible fungi have shown the ability to support and restore optimal health. In fact, mushrooms are some of the most revered medicinal herbs in Asian traditional medicine.

For example, in China, the oldest surviving materia medica known as Shen Nong Ben Cao Jing extolls the health-supporting properties of the reishi mushroom (Ganoderma lucidum). According to the text, which dates back to about 200 A.D., eating this mushroom regularly can help preserve your youth and vitality. This is why in Traditional Chinese Medicine (TCM), reishi is called the “mushroom of immortality.” [1][2]

Another fungus mentioned in old medical books is the parasitic Cordyceps sinensis. Although not taxonomically considered a mushroom, it is described in ancient texts as an “exotic mushroom” with a wide range of amazing properties. C. sinensis, often referred to simply as cordyceps, features prominently in TCM as well as in traditional Tibetan and Indian Medicine. In Sikkim, a state in the northeastern part of India, traditional healers believe that this fungus can support healthy energy, appetite, stamina, endurance, libido and sleep quality. [3]

In European folk medicine, the use of medicinal mushrooms is also well-documented. For instance, the tree parasite Inonotus obliquus, commonly known as chaga, has been used in Eastern Europe since the 12th century. This medicinal fungus is also traditionally prescribed to support digestive, heart and liver health in Siberia. Like cordyceps, chaga is not actually a mushroom but is historically considered as one. [6]

Because of their widespread use in traditional medicine, mushrooms are now extensively studied by modern researchers. Reports of their beneficial properties not only attest to their potential to support optimal health, but also showcase their suitability for a wide range of applications. Apart from being culinary ingredients, mushrooms have become popular dietary supplements for supporting optimal immune health. But what makes these medicinal fungi so perfect for the job?

Organic mushrooms: The best food for your immune system

According to research, about 70 percent of your immune system is located in your gut, and your immune cells directly interact with the microbes that reside in your colon. The healthier your gut microflora is, the better it can support your immune system, which translates to stronger immune defenses. [7] A healthy gut microflora is characterized by a balanced composition of good and bad microbes, which you can achieve and maintain with the help of prebiotic foods.

Prebiotic foods are nutritious foods that help your good gut bacteria thrive. They are normally high in soluble fiber, which helps nourish these beneficial bacteria. As your gut microbes break down soluble fiber, they produce short-chain fatty acids (SCFAs) that benefit your digestive and immune systems. [8][9] According to a study published in the journal Cellular & Molecular Immunology, SCFAs can support the healthy functions of many immune cells that serve as your body’s first line of defense against threats. [10]

Organic mushrooms are some of the best prebiotic foods that you can add to your diet. They contain plenty of soluble fiber, such as mannans, galactans and a– and B-glucans, that can support a healthy gut microflora. [11] Studies also show that B-glucans, in particular, is a biologically active polysaccharide that can support robust immune responses. [12] Thanks to their high soluble fiber content, organic mushrooms can help you maintain a healthy digestive system and a strong immune system at the same time.

Organic mushrooms are also an excellent source of immune-supporting vitamins and minerals, some of which also double as potent antioxidants. Vitamin C and selenium are great examples of these antioxidant nutrients. According to studies, vitamin C supports both your innate and adaptive immune systems by helping maintain your skin’s barrier function. [13] Because your skin harbors a wide variety of innate and adaptive immune cells, its protective abilities are considered a crucial part of your body’s natural defenses. [14]

Together with vitamin C, the antioxidant mineral selenium helps protect your immune cells from oxidative stress. [15] In fact, they are just two of the many antioxidants found in organic mushrooms that serve this purpose. Although your immune system is tasked with defending your body, its components still need protection from certain threats. These threats are known as free radicals, which can trigger oxidative stress that can damage even your immune cells. Oxidative stress is not only linked to premature aging of the skin, but also an early decline in immune function. [16]

Organic mushrooms also contain choline, copper and zinc, which are all essential for healthy immune function. Copper is necessary for maintaining healthy white blood cells – your body’s immune cells – while zinc plays an important role in the normal development and activity of your innate and adaptive immune cells. [17] Like copper and zinc, choline is also required for healthy immune cell activity. In fact, according to Canadian researchers, innate immune cells called macrophages need choline to function optimally. [18]

On top of providing these important nutrients, organic mushrooms can also help you maintain healthy vitamin D levels. You need this essential nutrient to efficiently absorb minerals like calcium, magnesium and phosphate, as well as to support optimal immune regulation. [19] According to studies, eating organic mushrooms regularly can help boost your vitamin D levels thanks to a compound called ergosterol. Ergosterol is an important component of fungal cell membranes that serves as a precursor to vitamin D2 in humans. [20]

The immunity benefits of organic mushrooms can be attributed not only to their rich nutrient content, but also to their bioactive components. Like plants, mushrooms contain various chemical compounds, such as polysaccharides, polysaccharide peptides, proteins, terpenoids and nucleotides, that contribute to their amazing medicinal and health-supporting properties.

Specifically, the researchers noted that the active components of these mushrooms can help stimulate various immune cells when needed. They do so by supporting the healthy production of cytokines – small proteins that act as intracellular mediators during an immune response. When faced with a threat, cells release cytokines to signal each other, which eventually leads to the activation of your innate immune system – your body’s first line of defense.

Aside from the five mushrooms mentioned in the study, there are other medicinal ones that can provide the same immune support. Here are seven of the best mushrooms for maintaining optimal immune health: 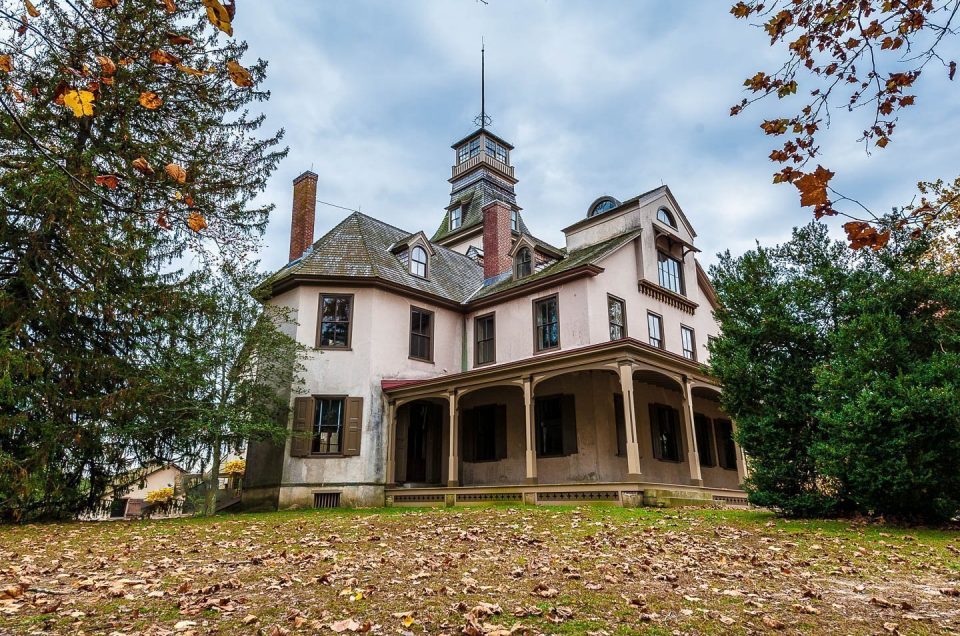 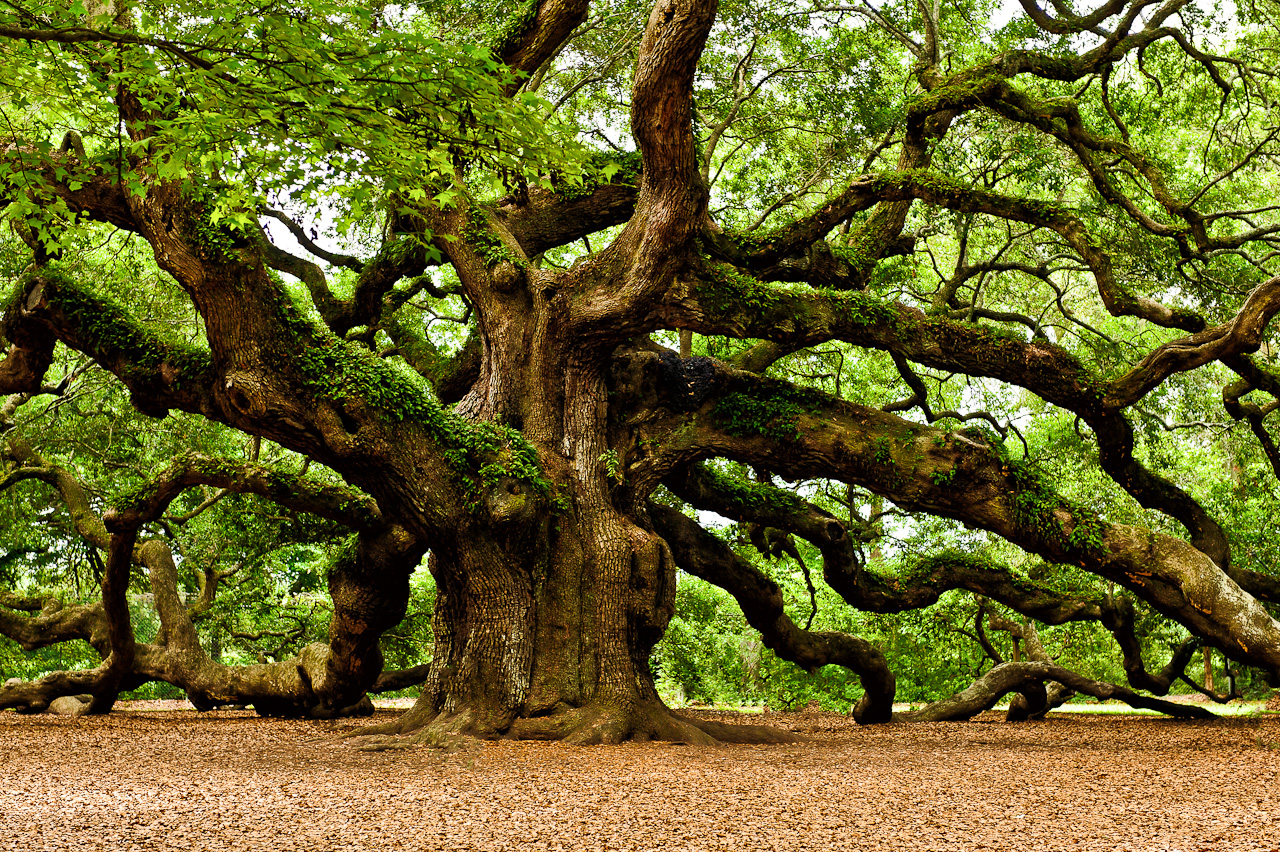 There is a lot of info here now – great images! The last section looks like it was copied from somewhere. I’m not sure that will help your SEO as much as original text?

I’m always intrigued by the many different types of fungi growing in the woods, although I wouldn’t dare to try to eat any of them. I’m sorry to say that your coffee with mushrooms doesn’t look very appetizing! Great photos to illustrate the story.

Hey Steve, thanks for the visit, I am again trying to bring all together and #optoutside to enjoy mother nature and the healing sunshine. I love your posts.

Your mushroom images are spot on. I, too, love to see the tree-trunk fungi appearing like steps or a ladder climbing the bark of a tree. You did a great job capturing those – exactly as I remember seeing them the last time I was hiking in the woods. As far as eating them goes – well, OK, maybe a couple on a pizza or in a salad – just not too many.

Hi Bill; Thanks for the visit, not only are you a great photographer, but an awesome writer too.

Thanks for the comments, much appreciated